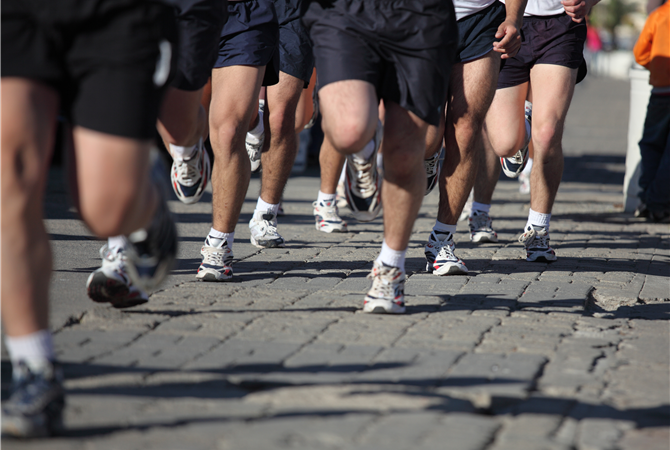 The irony, for me at least, is that I grew up as teacher during the advent of the national curriculum in the UK and yet I don’t seem to have been affected by it as much as I should. Well, that’s not quite true but when I consider my teaching of health-related exercise (or the lack of it) I seem to have either been oblivious to the need for it or made a decision (conscious or otherwise) to avoid teaching my students about it.

To be honest – and looking back from a safe distance – I think it scared me a little (just like dance did, although not to the same degree). I think it scared me because I didn’t know very much about it. My first degree had focused primarily on psychology and sociology and the biomechanics and physiology side of my sports studies course had been dropped as soon as possible. Couple that with my own struggles with maintaining peak fitness (I wasn’t the most dedicated exerciser as a player as I really just liked playing– one of my downfalls I suppose) and health-related exercise didn’t have great appeal to me.

Personally, I have little love for the bleep test (or multiple level fitness test). It’s something that I recall, to this day, with dread. To me it was a way of proving what I already knew, and what everyone else apparently already knew, i.e. that I was one of the least ‘fit’ of the players in my position. My asthma didn’t help but I think my dispiritedness played a bigger part. Knowing I was the least fit player acted as a suit of armour. But neither that knowledge, nor the test itself, ever motivated me to do better. Instead it simply served as something to get through. I had other attributes as a player, but my bleep test score just served to highlight my weaknesses. As a player I was never taught the thinking behind doing the test, nor the reasons why it was being used, I was simply told to do it. In some respects, I think I wanted to avoid those same feelings for my students, while in others I was worried that my own ignorance would lead me to the position where I would simply request my students to do it.

As I developed as a teacher and the word ‘pedagogy’ started to mean something to me I started to question our (as a department) collective approach to health-related exercise. Put simply we used to spend the coldest weeks of the year making the kids run cross county (because the pitches were frozen and we couldn’t do rugby) and used to set up a fitness circuit in the gymnasium (when it was raining) for a whole year group of boys to run and in which titles such ‘king of the gym’ and ‘iron man’ were awarded to the fittest and ‘most improved’ and ‘trier’ to those who were expected to do poorly but who surprised us as members of staff. Both of these sessions were predominantly weather dependent and not learning driven, and they focused on the students’ doing (at our request) and not understanding (for the student’s own development) exercise.

Towards the end of my teaching career I started to change these institutionalised approaches to health-related exercise. For example, we looked at different strategies for cross-country. We explored pacing and interval work and the idea of run-walk as we tried to help the students to understand not only that being active was better than being inactive but also why and perhaps most importantly what they could do about it. They were no longer judged (by me at least) by their time and finishing position but by their knowledge, understanding and personal development.

I have no idea what happened to those steps forwards when I left the school, but I suspect that they vanished from the programme (as most of my work did) and that ‘king of the gym’ has since been reinstated. I guess I can’t take responsibility for that, but I can take responsibility for what happened on my ‘shift’ and try and help the teachers that I now work with not to make the same mistakes as me. If PE has a role to play in health then we need to think less about sport, fitness and performance and think more about health, activity and participation. My curriculum didn’t encourage health but fitness (in fact it overtly rewarded it) and I didn’t see myself as being part of the long-term health of my students. I don’t think I was alone in this (or indeed I don’t think I’m a standalone or even minority case) but that’s in the past. The question is “what can we collectively and individual do to make sure my example is not the norm?”

Harris sets out to review the field of health-related exercise (HRE) and uncover the enduring themes and up-to-date issues that relate to this field. She begins by offering two definitions of HRE, one from a general standpoint and another related to education. Both, in my mind, allow us (as a subject) to position our expectations and ourselves when it comes to HRE. With regards to the general definition Harris suggests “HRE is activity associated with health enhancement and disease prevention.” To me this is a ‘doing’ definition and stands in contrast to the educational definition, which suggests that HRE relates to the “teaching of knowledge, understanding, physical competence and behavioural skills, and the creation of positive attitudes and confidence associated with current and lifelong physical activity.”

My reading of this – and the rest of the chapter – is that schools generally, and PE specifically, have taken on a perspective and attitude towards HRE that is focused on ‘activity’ and not ‘knowledge and understanding.’ To me this means that we have focused on being an active subject in which students move around rather than a subject that helps to create a ‘positive attitude and [the] confidence [to be involved] in current and lifelong physical activity.” As my example above indicates (and as Harris suggests) physical education has adopted a narrow interpretation of HRE that has led to a number of undesirable practices (to be discussed later but refer to king of the gym).

At the heart of Harris’s chapter is the question “is health a driver for physical education?” and through a review of the field (albeit predominantly from a UK perspective) she seeks to answer that question. She argues that while health drove PE in the early part of the 20th Century this aim has since been overtaken by other objectives; chiefly skill development. However, this seems to be a big oversight as school is positioned as “an appropriate setting for the promotion of health-related learning and behaviours, not least because there is the potential for sustained exposure to an environment which can positively influence the behaviour of almost all children for about 40-45 per cent of their waking time.” That said PE itself only accounts for less that 2 per cent and as such must consider itself as a vehicle for change and not the opportunity itself. In other words, it needs to be a ‘learning’ and not just a ‘doing’ part of students’ HRE education.

Behind the concern for the form that HRE takes in schools is an on-going concern about teachers “relatively limited knowledge and understanding of the area.” HRE is generally not well taught in schools, universities, or in professional development situations and as such teachers are required to get by on what they know or can glean from other sources. While some of this learning might come from governmental initiatives and the publication (both commercial and otherwise) of resources there is little understanding of how teachers access this information. Furthermore, while much “formal and semi-official government rhetoric” positions schools as important places for students to learn about health there is little connection made between children’s preferences for lifestyle, recreational and non-competitive activities over the government’s drive for competitive school sport.

Harris suggests that some teachers are guilty of forcing some students into “hard, uncomfortable exercise, such as arduous cross-country running and fitness testing, at the expense of developing understanding and physical and behavioural skills and enhanced attitudes through positive activity promotion.” School is often seen as the place to exercise and fails to acknowledge where young people’s activity might occur. We need to develop a better understanding of the range of settings and the relative modes and times that young people exercise (i.e. active transport, informal play, formal sports and active jobs) and position PE as a facilitator and catalyst for enhancing these activities across the life course.