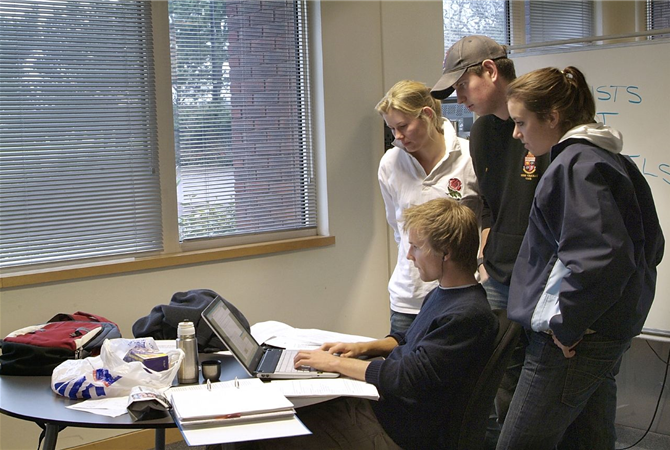 What are emerging teachers learning when they go into schools? Are they learning how to teach or how students learn or are they learning to be teachers? Where do teachers learn about pedagogy and equity and the like if it isn’t in schools? The literature would suggest that first and foremost non-teachers have to learn to be teachers before they can enhance their pedagogical knowledge. School, therefore, is not being positioned as a professional learning space but as place where new teachers learn about the profession.

In the proceeding blogs we’ve established that the places that teachers spend most of their time – outside of the classroom – is the departmental staffroom or PE office. We have also established that these places are not neutral. They are representative of different ways of acting, dressing, talking, and being. They are physical spaces that come to be perceived in certain ways (i.e. supportive, conflicted, macho, sexist etc.). They are spaces that have come to represent certain conceptions of physical education and sport, and they are spaces that are lived. They are not just rooms where people gather but communities that have their own rules and expectations. As such the physical education staffroom should be viewed as a collective and shared living space with its own house rules and duty rosters. It could be argued that before any professional learning can occur, the place that is the staffroom needs to be understood and negotiated (indeed that is what the previous blogs have argued).

The staffroom is clearly an influential space for emerging teachers. Rossi and colleagues argue that until we know more about the dynamics of such a space and how ‘it’ impacts on the ways in which teachers perceive, and therefore internally construct teaching, then we are poorly positioned to help these spaces become professional learning spaces. At present these are not places where the new teacher has agency or “the ability to influence one’s own field and change through learning within the practicum or through induction”. Instead new teachers are expected to fit in and take up and participate in the enduring construction of the physical education teacher and profession.

The physical education staffroom is traditionally constructed as a material space – one often geographically isolated from the rest of the school – where the department are housed. It is seen as a physical space and, for those of us who have been in one, it is a place to ‘dump your bag’ between lessons. It should also, however, be considered as a “social, cultural and emotional space” which has a strong influence on emerging teachers’ current and future expectations about physical education. It is a space where the non-teacher is transitioned into the teacher. It is a space that acts on emerging teachers both consciously and unconsciously. It is not a space where many emerging teachers can resist the expected construction of physical education but it is a space that varies considerable in its expectations and practices.

The staffroom is a space that acts on emerging teachers both consciously and unconsciously.

For some teachers in this study it was a space that was “historically and socially shaped” – be it as a lone teacher whose office was in an old storeroom near the gym or as a fully integrated new teacher with her or his own desk – and in which there were very real constraints and expectations. For others it was “space of possibility” – a place for “re-opening and re-thinking” new possibilities of practice.

For teachers caught in isolation (i.e. those, as we have heard from the practitioner responders in previous blogs, who made up the entirety of the physical education department) the “space of possibility” had to be self-constructed. While these individuals had no immediate colleagues to influence them about physical education the school itself played a significant role in determining who they were. It determined where they spent most of their time, with who could interact, and limited “casual, serendipitous contact as well as more focused social or work-related conversations”. In short they were often placed in departmental silos (either physically or conceptually) and they experienced the “ambivalent or low status in which PE is held in the school system”.

For teachers positioned in larger groups there were opportunities to interact but also expectations about how these interactions could/should happen. For some (as discussed in earlier blogs) this meant being constrained in terms of the possible ways they could ‘be’. For others they enjoyed a “strong sense of openness, support and cooperation” both within and beyond the staffroom. Significantly these staffrooms were professional spaces that teachers felt they could influence and contribute to as time went by.

In both these examples “space is culturally and historically shaped”. In some cases staffrooms can be seen as spaces that evoke certain subjectivities, practices and relationships – indeed the occupants (i.e. other teachers) plan for and expect them. In others they are spaces of possibility that support and encourage new ideas and which quickly drew emerging teachers towards the centre of practice. Importantly they were not a single space. They are a ‘space’ that “has to be understood through its multiplicity and not through any assumed singularity”. It is a space that has certain possibilities.

What do we learn from these spaces? Are they places where emerging teachers learn what it means to be a teacher and a member of the physical education profession or are they spaces where this learning is negotiated? Are they places that expect certain practices or are they spaces that are accepting of new practices? Rossi and colleagues support the idea that “for beginning teachers to learn the ways of thinking and acting associated with new kinds of teaching, they need to be placed with mentors who are already reformers in their classrooms and schools and to develop collaborative environments”. This also means that the staffroom has to become more than a physical place to ‘dump your bag”. It needs to be “an opportunistic professional learning space” that moves beyond the material and becomes a genuine space of possibility.