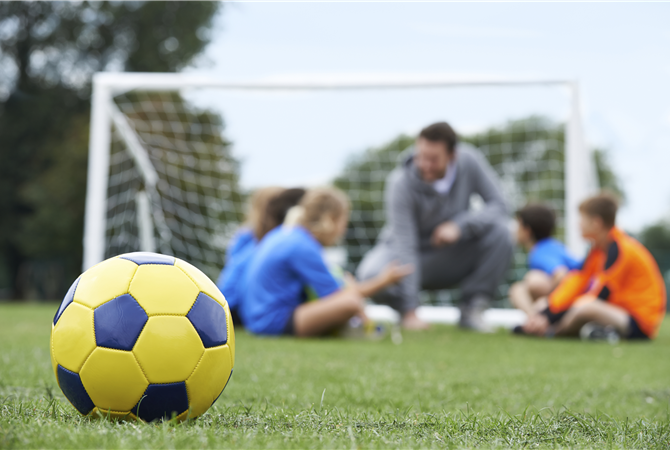 Memmert sets out to “demonstrate how teachers and coaches can foster tactical creativity in different basic tactical forms”. He does this by providing three series of six lessons that look at the following common aspects of invasion games: 1) identification of gaps, 2) taking the ball near the goal, and 3) supporting and orientating. He introduces these three tactical problems by stating that player rotation (i.e. that “positions and team players/opponents are systematically varies) and Diversification (i.e. using different motor skills) are the two fundamental aspects of everything that follows. Player rotation seems obvious but the elements of Diversification Memmert suggests don’t. In advocating for the use of different motor skills he sets up each of the six lesson/weeks of practice around the following motor skills: 1) hands only, 2) feet only, 3) bigger ball, 4) weak hand, 5) weak foot, and 6) smaller ball. Memmert also hints that Deliberate Coaching (i.e. only the rules are provided rather than tactical feedback or tactical instruction) and Deliberate Motivation (i.e. only instructions that positively bolster players) are aspects of the six D’s of TCA that might be used in the 1-Dimension games and Game Test Situations he introduces.

Identification of gaps – in this set of six lesson Memmert “evokes” the tactical behaviour of identifying gaps. He sets up a grid (say 10m by 10m) and places three defenders on a central 5m line. He also sets a maximum height that a pass can travel by stringing a rope across the central line just above the defenders heads to signify the upper boundary of the pitch. With two attackers on each side of the central line he asks them to play the ball past the defenders and below the upper boundary using the six Diversification elements listed above. In considering ways of developing this idea I wondered if a wider space could be employed and players asked to run the ball through the gap (either with ball in hand or dribbling) without being tackled or a smaller gap (and maybe with soft tennis balls and smaller rackets) player could be asked to play passing shots.

Taking the ball near the goal – Setting up a 15m long and 10m wide pitch with two defenders on the central line Memmert introduces this task to challenge players (four of them stood on the line furthest from the goal) to play the ball past the defenders without losing possession. The six Diversification elements are the same but the challenge is about movement off the ball as well as using the ball (e.g. weight, direction, unexpectedness) creatively. In thinking of developing the games I wondered what would happen if you rotated the pitch and asked the players to find width instead of depth and used a dribble or run with ball in hand rather than a pass.

Supporting and orientating – Another game that focuses on ball retention and off the ball movement. Working in a 10m by 10m square three attaching players are asked to pass the ball to each other as many times as they can while three defending players try and keep possession. Again, in looking at ways of developing the game I wondered if it needed to be in game that valued depth but which instead valued width. What if the aim was to keep possession rather than progress up the pitch. This is a tactic often used in rugby sevens as teams wait for a chance to exploit space and often give up ground rather than commit to the tackle. Equally it happens in other invasion games when teams are looking to run down the clock.

Regardless of the usefulness of the above games (and maybe my adaptions) I felt, particularly this week, that at the heart of this book was a good theory that is still a little way from being practically useful. The very fact that Memmert, for what ever reason, chose not to bring TCA to the real world only reinforces this for me. I am left to acknowledge the real potential of the model and yet ponder at its true applicability and I am wondering if you, the reader, can help me to understand how to apply this model in coaching or school situations.